Watching footage in the news this week of a male person running into a crowd to swing a punch at a sixty year old woman, you might be forgiven for assuming this was another example of male violence against women, and therefore proof that women sometimes need spaces of their own, in order to stay safe. You’d be wrong in this instance, because in fact this was apparently a trans-identified male doing the punching, so it’s not male violence at all: in fact the sixty year old woman is the one to blame because she wants to go to a feminist meeting about gender. It’s a neat trick: if you make sure women can’t go to feminist meetings about gender they will not be informed enough to criticise an ideology which transforms a fist-swinging male into the victim of a sixty year old woman who wants to go to a feminist meeting about gender.

It ties in with other issues raised recently by reports of a male rapist who got to be housed in a woman’s prison because he identified as trans. In both examples I’m interested to know how a man with a male body (sex) who has displayed the most extreme kind of toxic masculinity (gender) can get to be diagnosed as a woman. Where, in this man’s body or soul, is there even room for the tiniest chink of the female or the feminine? It’s surely already filled up with all the male and the masculine?

Many people seem to believe there is a process whereby, in settings like prisons, the men who pretend to be women are weeded out. People believe that only genuine gender- dysphoric men get to be acknowledged as women, and that therefore they must need this recognition and special treatment. Some common beliefs about male rapists in women’s prisons include:

Considering that Josh Jackman wrote an article in Pink News admonishing everyone for ‘misgendering’ this rapist, I thought he must have known something I didn’t.

So I decided to do some research on these ‘rigorous psychological tests’ that could prove that a man is indeed a woman, against all other evidence to the contrary. Some evidence about the Scottish prison system was sent to me. It states that ‘since 2011 prisoner healthcare has been the responsibility of the NHS’ and it gives a link to the NHS guidelines on gender reassignment for further information.

I duly read through the NHS Scotland Gender Reassignment Protocols. The treatment pathway for trans-identifying prisoners certainly takes considerable time (a whole year on hormones before assessment for surgery for example). But that’s ok: that is the one thing that the most serious of offenders have got in spades isn’t it…? Time…?

Diagnostically though, there is nothing rigorous or testing about it: it relies totally on the say-so of the presenting prisoner. Counselling or therapy are provided on the basis that the prisoner is telling the truth about his feelings, just as it is for non-prisoners. In fact, to do otherwise is now on the verge of being officially identified as conversion therapy.

A statement from UK organisations in January 2017 condemns the practice of conversion therapy and refers to a memorandum of understanding from 2015 which adds ‘gender identity’ to ‘sexual orientation’ as a characteristic which may no longer be challenged. They say:

Conversion Therapy is the term for therapy that assumes certain sexual orientations or gender identities are inferior to others, and seeks to change or suppress them on that basis.

What this means in practice is that a presenting gender identity must be taken as the truth. NHS Scotland are one of the signatories of this statement and there is pressure on NHS England to follow suit. Trans support groups such as Stonewall, Pink News, Mermaids, GIRES and Gendered Intelligence have promoted the notion of conversion therapy with regard to trans people, to the point where to question it is to be automatically labelled transphobic. At the same time they have insisted that only trans people can be consulted on trans issues. And trans groups certainly have been listened to. In England and Wales the prison service says this:

At the Trans Inquiry chaired by Maria Miller in 2015, written evidence from the British Association of Gender Identity Specialists said something more cautious:

The converse is the ever-increasing tide of referrals of patients in prison serving long or indeterminate sentences for serious sexual offences. These vastly outnumber the number of prisoners incarcerated for more ordinary, non-sexual, offences. It has been rather naïvely suggested that nobody would seek to pretend transsexual status in prison if this were not actually the case. There are, to those of us who actually interview the prisoners, in fact very many reasons why people might pretend this. These vary from the opportunity to have trips out of prison through to a desire for a transfer to the female estate (to the same prison as a co-defendant) through to the idea that a parole board will perceive somebody who is female as being less dangerous through to a [false] belief that hormone treatment will actually render one less dangerous through to wanting a special or protected status within the prison system and even (in one very well evidenced case that a highly concerned Prison Governor brought particularly to my attention) a plethora of prison intelligence information suggesting that the driving force was a desire to make subsequent sexual offending very much easier, females being generally perceived as low risk in this regard. I am sure that the Governor concerned would be happy to talk about this.

The Governor concerned was not asked to come in and talk about this. The groups invited in to give further evidence did not include any representatives from women’s groups either. Trans support group Action for Trans Health however were one of the trans representatives who were invited to give evidence. Action for Trans Health were coincidentally one of the main players stirring up protest against the feminist meeting on gender this week, mentioned above. They helped to instigate and organise the shutting down of the original venue through sustained online harassment, and they coordinated the search for the new secret meeting place so they could disrupt that as well. A lot of threats against ‘TERFs’ were shared on social media. They ‘loved’ this tweet on Twitter:

After the event, when the stories of the violence had circulated, they posted this: 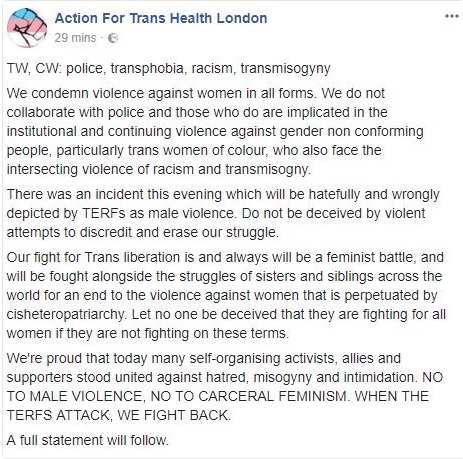 The Trans Inquiry chose to listen to trans groups such as this one, actively engaged in fighting women and stirring up hatred, instead of women’s groups with genuine concerns over what changes to the Gender Recognition Act will mean to women’s rights and services. The result is that there can be no public discussion about competing rights. Public bodies continually have to refer to the same small group of unchallenged and often unqualified ‘experts’ who all reinforce one another. Once NHS England signs the new Memorandum of Understanding (which they probably will because they are actively ‘listening to trans people’) the door will effectively be closed, and sealed, against outside opinion. Health professionals including GPs, counsellors, therapists and all NHS staff will be constrained in their treatment of patients by a restrictive ideology which has no evidence base. Institutions such as the Prison Service, the courts and the government itself will look to the NHS for ‘expert’ opinion.

And men will have to be women when they say they are. There is no alternative. Even when, as recently reported, there are now eleven inmates in one prison alone seeking sex realignment surgery, all of them sex offenders. The Prison Governor mentioned above could have predicted that, but he’s not trans so his evidence was not called for.

In summary, these appear to be the new rules:

Insist that only trans people should be consulted on gender legislation

Persuade everyone that questioning a trans identity is always transphobic

Punch feminists who persist in questioning the trans narrative

Frighten everyone else into silence

Once all those rules are in place and are applied to all situations, including male on female assault in a public place and the housing of male sex offenders in a woman’s prison…job done.

And this is how a man with a male body (sex) who has displayed the most extreme kind of toxic masculinity (gender) can be housed in a women’s prison.

7 thoughts on “Why is a A Male Rapist In a Woman’s Prison?”

My Tweets
Follow Not The News in Briefs on WordPress.com